Laredo, TX (Friday, March 30, 2018): The Laredo Heat Youth Soccer Club & Academy has announced a unique opportunity to local youth soccer players interested in playing at a higher level by introducing the first true Non-Pay to Play Competitive Program in the Laredo and Webb County Area and is open to all interested players within the designated age groups in the Gateway City and surrounding area, including Nuevo Laredo.

As a true Non-Pay to Play Competitive Program, some of the benefits that will be available to both the players and their parents will be:

The first City Wide Program will be a Player Opportunity Event scheduled for Saturday, April 7, 2018 at the Texas A&M International University Soccer Complex.

Each Age Group will have its own designated time to showcase their talents on April 7th to the visiting Houston Dynamo Youth Program Director and the local Heat Youth Coaching Staff. The designated times will be:

Heat Youth Club President Shashi Vaswani said, “We have always believed beyond a shadow of a doubt that the youth of a community are an integral part of its future and are essentially the fabric of society”.

“We are not only looking for committed players but for individuals that are willing to become leaders on and off the field and are ready to become role models in our community”.

“While there are many other great programs supporting the youth throughout our community, we have decided to use the sport of soccer as a vehicle to attempt to further enhance the education and playing careers of our younger generation”, concluded Vaswani.

In addition to Vaswani, Houston Dynamo Director of Player Development, James Clarkson mentioned, “The Dynamo Academy are very excited to partner with the Laredo Heat and provide support on and off the field with developing players and the game. Together we will be able to raise the level of play and provide unique opportunities and pathways for the players”.

The Laredo Heat Youth Soccer Club and Academy is a 501 (c) (3) Non-Profit Corporation that operates in Laredo and Webb County, Texas for the sole purpose of training the youth in the area in the sport of soccer. The mission of the club is to get youngsters to learn to play soccer, get advanced players into competitive tournaments and teach these youngsters the rules of the game and the importance of proper training, exercise and doing well in school.

The Laredo Heat Youth Soccer Club and Academy accepts donations to fund its mission and any interested party wishing to donate, can contact the organization at (956) 723 – 4700.

CONNECT WITH US ON SOCIAL MEDIA 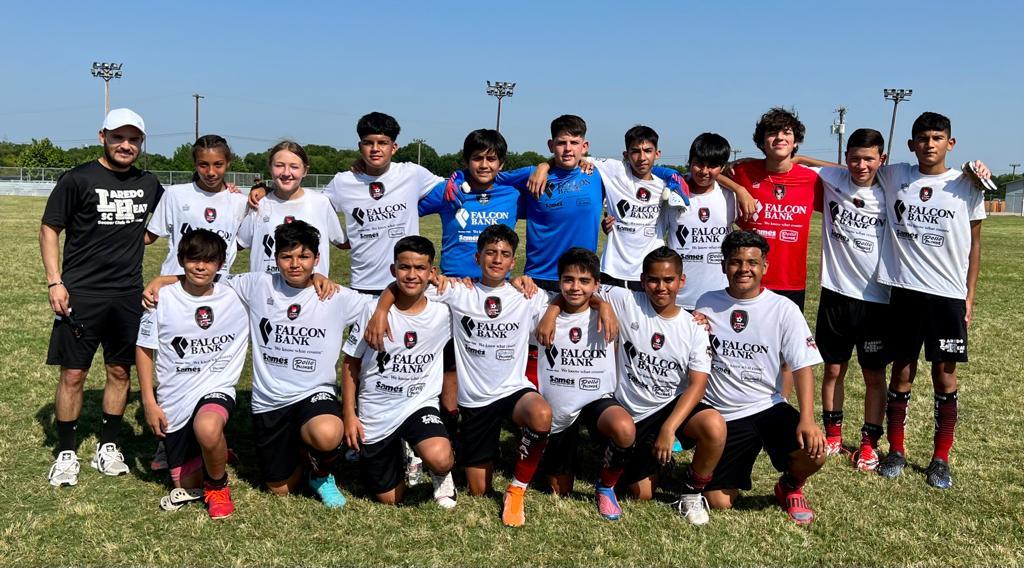 The Laredo Heat SC youth academy’s tuition-free Under 14 team advanced to the South Texas Youth Soccer Association Presidents Cup State Finals.
Laredo earned the right to represent the STYSA Western District by winning 2-1 on Saturday, May 7 in San Antonio against the McAllen Dynamo STX.
“We are so proud of the performance of our Under 14 athletes,” Laredo Heat SC Vice President Priya Vaswani said. “Their dedication and continued growth is always exciting to see, and we can’t wait to see them represent the Western District in the STYSA Presidents Cup State Finals.”
The STYSA Cup State Finals will be held May 21-22 in College Station.
The U14 team features Juan Brenis, Samantha De Hoyos, Alfredo Elizondo, Milly Garcia, Giovanni Garza, Leonardo Gasca, Tadeo Gasca, Fernando Gutierrez, Edwin Hernandez, Rodrigo Lozano, Asael Montoya Zapata, Santos Pruneda, Alan Robles, Mario Rosano, Alessandro Salazar Lee, Javier Sanchez, Luis Sandoval, Diego Silva, Karlo Tenorio, Jose Villanueva and Rafael Yanez.
Visit laredoheatsc.com and follow @laredoheatsc on social media to stay up to date on the latest news. Any youth players interested in joining the academy can visit laredoheatscyouth.com for more information. To see plans announced last week for construction of the Laredo Heat Soccer Complex, visit team.laredoheatsc.com/soccercomplex.
The Heat’s National Premier Soccer League team opens its season Friday, May 13 in San Antonio and returns for its home opener May 18. The Heat play their home matches at the TAMIU Soccer Complex. Tickets are $5 for general admission and $20 for VIP access, and children 12 and under get in free.